As reported by the government of the State of Bahia, the agreement on the unification of the terminals of Porto Sul, Ilhéus, signals the start of construction works for the new port, which aims to provide extensive storage and transport capacity for key commodities including iron ore, grain and fertilizers. Specifically, the capacity for iron ore will be for up to 41.5 million tpy. 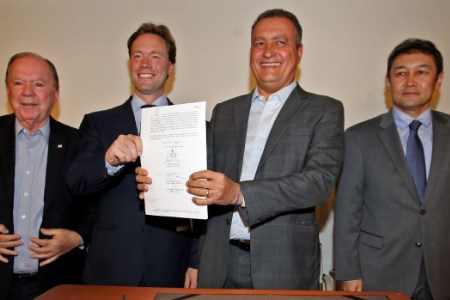 The signing ceremony was held on Tuesday 21 May, in the Governor Acts Hall in Salvador, Bahia, and Eurasian Resources Group was one of the principal signatories. Present during the signing were the CEO of ERG, Benedikt Sobotka; Governor of the State of Bahia, Rui Costa; Ambassador of the Republic of Kazakhstan to Brazil, H.E. Kairat Sarzhanov; Vice Governor of the State of Bahia and Economic Development State Secretary, João Leão; and Chief of the State Legislative Chamber, Nelson Leal. The Executive Chairman of Bahia Mineracao, a holding company of BAMIN, Erik Gaustad, and the CFO of BAMIN, Alexandre Aigner, also attended the event.

Chief Executive of ERG, Benedikt Sobotka, said: “Our partnership with the State of Bahia is a strategic one, and we are very pleased to further strengthen our cooperation. This agreement is an important step forward in accelerating the development of Porto Sul and ensuring that the right balance between economic development and commercial viability is reached. Today is the start of a new phase of our co-operation to deliver an investment programme of more than R$10 billion (around US$2.5 billion) here in Bahia and make an important contribution to the continued development and success of the region.”

Governor of the State of Bahia, Rui Costa, reiterated that the project only stands with the three assets together: the port, the railroad and the mining.

“That is why we are travelling to different parts of the world, so that investors can participate in the project and provide economic feasibility and bring jobs to the south, to the region of Jequié, Brumado and Caetité," he said.

Porto Sul has obtained all the necessary environmental licenses to operate in the area. Works at the port are expected to start in the second half of 2019. Around 30 000 direct and indirect jobs are to be created during the construction phase of both the mine and port. Once completed, operational capacity will provide over 10 000 jobs.

Read the article online at: https://www.drybulkmagazine.com/ports-terminals/28052019/bamin-signs-agreement-for-porto-sul-development-in-brazil/