Oldendorff Carriers has reported that its Erna Oldendorff vessel has now moved to the Yanai anchorage in Japan. The Japanese Coast Guard will carry out a further assessment of the damage following the ship’s collision with the Oshima bridge on 22 October. 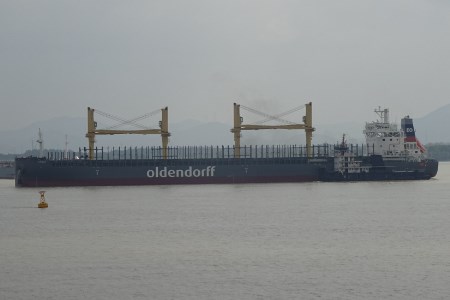 Initial reports that the vessel was sighted fleeing the scene were incorrect. It has been established that because of a strong and dangerous current near the bridge, it was impossible to anchor safely near the site of the accident. The Master reported the accident and then the vessel proceeded to its planned safe anchorage at Etajima in Japan.

Erna Oldendorff made contact with the structure causing damage to a water supply pipe and internet cables. The Oshima bridge is temporarily closed for traffic, but it is reported that one way traffic will resume on the morning of 24 October.

There were no personal injuries and no pollution as a result of the incident. Erna Oldendorff sustained damage to its mast and three cranes. Immediately after the incident, Oldendorff Carriers informed all relevant authorities and parties. There are 21 qualified crew aboard who are cooperating fully with the Japanese Coast Guard investigation.

Once again, the company would like to apologise for the impact and disruption which has been caused to the local community.

Read the article online at: https://www.drybulkmagazine.com/shipping/29102018/oldendorff-provides-update-on-japanese-bridge-collision/