This August was marked by new achievements of NIBULON. Last month, NIBULON’s fleet transported record volume of cargoes since the shipping company was established in 2009 – about 390 000 t. 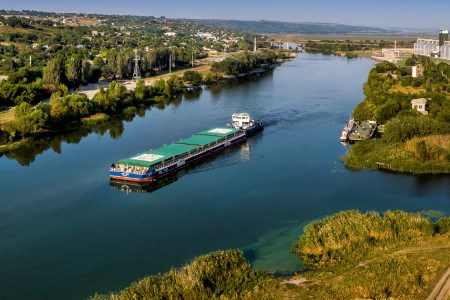 In addition, August was a record month in the company’s activities in terms of volume of agricultural products loaded for export by fleet (without calling at ports, directly on the roads) – almost 300 000 t. Thus, the company transported about 60% of grain for export by river transport. It should be noted that since the beginning of new 2018/19 MY, NIBULON has already exported about 965 thousand tonnes of grain. Comparing similar periods of previous years, it is the largest volume in the history of the company’s activities.

Thanks to successful implementation of the programme to revive the Dnipro River and the Southern Buh River as the main transport arteries of Ukraine implemented by NIBULON jointly with the European Investment Bank, the European Bank for Reconstruction and Development, the International Finance Corporation and other international financial institutions of the world, in 2016, navigation on the area of 134 km of the Southern Buh River was restored after a 25 year decline. In one year, the company managed to surpass the record of cargo transportation along this river from the Soviet period by 10 times. So, in the 80s to the early 90s of the 20th century, 1 million tpy of sand, stone, crushed stone and 50 000 t of grain were transported along the Southern Buh River. This spring, NIBULON passed a new milestone. It transported its first million tonnes of goods along the Southern Buh River, having removed more than 41 000 trucks from the highway Voznesensk – Nova Odesa – Mykolaiv. In addition, the company showed the best result in transporting goods along the main water artery of the region – 9620 t per one cargo trip.

NIBULON actively redirects its cargo flows to water transport, each year increasing volumes of cargoes transported by water transport. In 2017/18 MY, NIBULON transported 2.5 million tpy of products. In the coming years NIBULON plans to construct its fleet that will number 100 units in order to transport 4 million tpy.

Read the article online at: https://www.drybulkmagazine.com/shipping/18092018/nibulon-has-record-month-for-shipping/

Castor Maritime Inc. has announced the closing and drawdown of a US$55.0 million senior term loan facility, as well as a new charter agreement.