The application LaseRCD (rail car dumper) has been installed in the Ponta de Madeira Port in Sao Luis (state of Maranhao, Brazil), where Vale has located its port terminal for the shipping of mining materials. 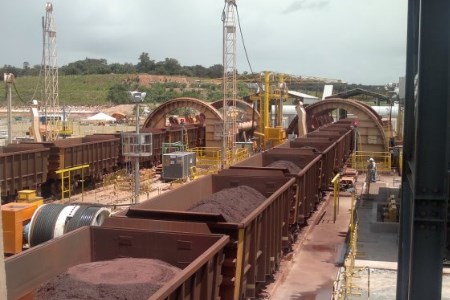 Here, LASE’s 3D laser measurement systems allow a reliable detection of foreign objects on the wagons before and a further emptiness control after the unloading process. According to previous successful projects in Sao Luis with this application, three further LaseRCD systems have been commissioned for ThyssenKrupp Brazil and end customer Vale at O-type rotary tandem dumpers there again.

Before the iron ore arrives in Sao Luis, it is transported by train out of the world’s biggest opencast iron ore mine at Vale’s S11D in the Carajas region, which needs to cover a distance of 892 km. One train (in total, 35 trains are in simultaneous circulation) even has a length of 3.3 km, which consists of 330 wagons. In the port terminal of Sao Luis, so-called O-type rotary tandem dumpers are used, where two cars/wagons can be unloaded at once without uncoupling through rotating couplings. For the unloading process, VALE required a measurement system, which is able both to determine unexpected objects on top of the material in a wagon and to undertake an emptiness control after the unloading process.

At the start of the processing in the dumping stations (tandem type) in Sao Luis, two wagons filled with bulk material drive into the station and are checked for objects such as humans, animals, branches etc. on top of the material. In case of a positive check, the wagons will be tipped over for unloading and return to their initial position. Normally the wagons should be empty, but it is possible that humid material can remain inside the wagon. In this case the remaining material is detected and is removed manually by the service staff before another dumping process.

For this solution at tandem dumpers LASE uses two 3D laser scanners, which are mounted centrally above each wagon as well as the software application LaseRCD, that collects the scanner data and does all needed calculations. When the wagons are positioned inside the dumper and being fixed by clamps, the laser scanners measure the surface of the material by 3D scan planes and detect it for unexpected objects. If nothing is detected the application signals the prior PLC to tip over the wagons. Afterwards the emptied wagons roll back to their initial position and the further emptiness control is triggered, where the inner surface of the wagon is scanned and a 3D scan profile image is created. This one is compared with an internally stored image (zero scan) of a totally empty wagon. In case of any difference by remaining material inside the wagon, the application generates a signal (three levels of non-emptiness signals) and sends volume data of the remaining material to the PLC. In order to protect the laser scanners against dust and rain, they are mounted into stainless steel hoods, which clean the scanner windows by an included air pressure unit. All systems have been implemented in collaboration with our Brazilian distribution partner C+ Tecnologia.

Read the article online at: https://www.drybulkmagazine.com/ports-terminals/20092018/lase-installs-3d-laser-measurement-systems-at-the-ponta-de-madeira-port/

SAMSON Materials Handling has received an order for an Eco Hopper from Bataan, Philippines.