The Department for Transport (DfT), in partnership with ABP’s Port of Southampton, has launched the UK’s first Port Economic Partnership (PEP), an innovative initiative to create stronger links between ports and government, to maximise long-term trade and economic growth. The Partnership will be launched at an event at London International Shipping Week, on board the NLV Pharos lightship. 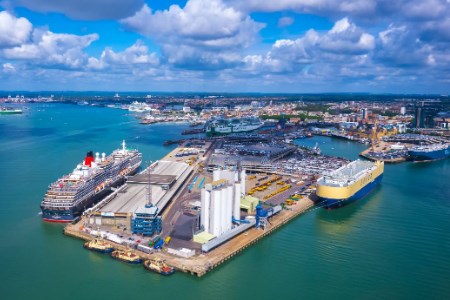 As part of its strategy, ‘Maritime 2050 – Navigating the Future’, launched in January 2019, the Government outlined the creation of Port Economic Partnerships as one way of creating a strong business environment for ports to thrive, in turn, boosting trade and driving the national economy.

Areas that the Partnership will focus on include leveraging the maximum benefit from public and private sector investment and ensuring that planning processes are as efficient as possible. It is anticipated that this will better facilitate ports’ investment in new freight handling facilities and other infrastructure needed to grow trading volumes and maintain the UK’s position as a leading maritime nation.

The Partnership will focus on ensuring that public and private sector organisations at local, regional and national levels, work together to enable improved links with our global trading partners, ready for a post-Brexit world where the resilience of our trading hubs is more critical than ever before.

The UK’s first PEP will see the Port of Southampton, the UK’s number one export port and Europe’s leading cruise turnaround destination, work closely with DfT to trial the concept

The Maritime Minister Nusrat Ghani said: “I am delighted to announce the first Port Economic Partnership with the Port of Southampton. This fantastic endeavour will be key to supporting the ambitions of government, helping to cement the UK as a leading maritime nation. Not only this, but this project will also allow the Port of Southampton to drive sector growth, enhance its offer to customers and serve its local community.”

Alastair Welch, ABP’s Regional Director for Southampton, said: “We are proud and excited to be joining the government in launching the UK’s first Port Economic Partnership. It’s great to see the government put maritime at the heart of the nation’s economic future. This is another fantastic initiative capable of turbo-charging trade and boosting the nation’s exports.

“ABP looks forward to working collaboratively with government to deliver the benefits which the Partnership will bring to support the Port of Southampton’s future growth. Ultimately, this important step will safeguard our position as the UK’s number one export port and a leading gateway for international trade, making significant contributions to jobs and the UK economy, both regionally and nationally.”

Read the article online at: https://www.drybulkmagazine.com/ports-terminals/16092019/port-of-southampton-and-uk-government-launch-first-port-economic-partnership/