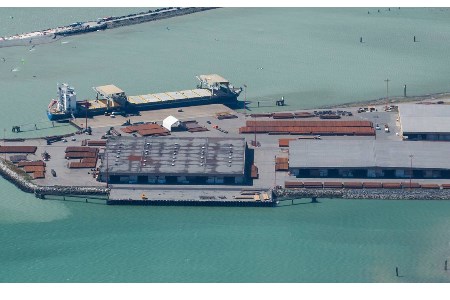 Squamish Terminals is a major break bulk terminal situated at the north end of Howe Sound in the District of Squamish, British Columbia providing cargo handling services to markets globally.

“Grieg Star has been the owner of Squamish Terminals for almost half a century. The hard work and dedication of the organisation over these years have impressed us more than once. We are proud of what has been achieved over these years, but now is the right time for the terminal to continue under new ownership. Western Stevedoring has the right focus and expertise to further strengthen the terminal, and we are confident it is in the right hands going forward,” said Squamish Terminals Chair Rune Birkeland.

“This acquisition strengthens Western Stevedoring’s continued commitment to the break bulk sector in British Columbia’s Gateway and expands the service options currently provided to our customers with greater capacity for the co-ordination of efficient service and consolidation of cargo,” said Western Stevedoring’s President Brad Eshleman. “We have full confidence in the team at Squamish Terminals and look forward to building on their long-standing relationships with customers, partners and the community.”

Grieg Star is part of the privately-owned Grieg Group, established in 1884, and is a ship owning, managing and operating company. Grieg Star operates a fleet of around 40 vessels transporting parcel cargo, break bulk and dry bulk cargo. More than 30 vessels belong to the open hatch fleet. In addition, the company operates several dry bulk supramax carriers, owned and chartered long term. All Grieg Star vessels are a part of the G2 Ocean pool, the world’s biggest shipping company within the Open Hatch segment, a joint venture between Grieg Star and Gearbulk.

Western Stevedoring is a diversified stevedoring contractor, terminal operator and logistics company with operations throughout British Columbia. Western is a recognised leader in cargo handling innovation and operational excellence servicing customers worldwide for more than 70 years. Western Stevedoring is a wholly-owned subsidiary of Carrix Inc., headquartered in Seattle, Washington. Carrix is the parent company of SSA Marine Inc. and is the world’s largest privately held marine and rail terminal operator.

Read the article online at: https://www.drybulkmagazine.com/ports-terminals/15052018/grieg-star-sells-squamish-terminals/

Bahri has signed an MoU with Ma’aden as the two parties seek to develop co-operation across various logistics sector fields.