The first loaded vessel dispatched from marine terminal of East Mining Company Limited (EMCO). The bulk carrier Glad Mark with 56 000 DWT anchored at the roadstead of Coal Sea port of Shakhtersk for coal loading on 6 April. It took three days for the company’s fleet to ‘accomplish the mission’. The coal loaded was shipped and will be further used by Thailand consumers. 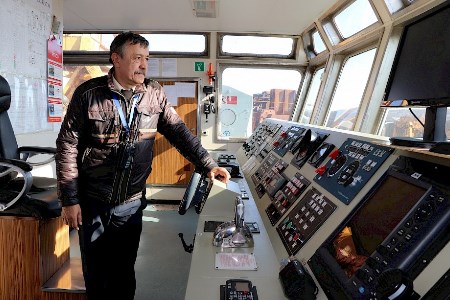 “This vessel is extremely flexible, perfectly fitting in our small basin. It takes around 20 min. to load cargo from stacker, then the vessel leaves the basin and in 20 min. we are there along the shipboard for unloading, one hour later the vessel is empty and goes back to the basin. It is pleasant to stay on board the new comfortable vessel with all modern conveniences. The crew of each Rejd vessel makes 12 people, with three shifts of four people, accordingly the crew of six EMCO Rejds makes 72 people,” tells Rejd 2 Captain Anatoli Kolesnikov.

Read the article online at: https://www.drybulkmagazine.com/ports-terminals/11042018/emco-marine-terminal-dispatches-first-loaded-vessel/