Work has progressed on the design of the Lucky Bay site, with construction due to begin in the beginning of June. New computer-generated imagery shows the proposed grain storage facilities, truck unloading and traffic flow through the site. 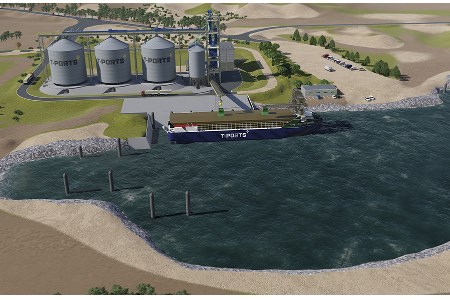 Recent test pitting was carried out by Lucas Total Contract Solutions. This found good quality and depth of rubble materials is available onsite and within good proximity to the build sites.

T-Ports has engaged local engineering firm Ahrens for the construction of the Lucky Bay port facility. Both mechanical and civil design works are well advanced.

The earthworks contract for the Lucky Bay bunker site has been awarded to Darlington-based Lucas Total Contract Solutions.

The earthworks contract for the Lock bunker site has been awarded to Buttrose Earthmovers, based at Direk in Adelaide's north.

The contract for the grain in-loading equipment (drive over hopper stackers) at the bunker sites has been awarded to Kilic Engineering, based at Regency Park.

The tender for bunker walls will be released within the next few days.

Software company Eka have been appointed for the development of a grower portal/interface system.

This system will allow growers and the trade to see their transactions and stock levels in real time and undertake weigh-note transfers to facilitate fast payment.

All going well, construction at both the Lucky Bay and Lock bunker sites planned to commence early in June.

The infrastructure will enable diversification of grain and fertiliser berths with the latter using a separate berth directly adjacent to the grain berth.

Stage 2 at Lucky Bay involves 27 000 t of silo storage in fumigable permanent siloes, scheduled for completion well in advance of harvest 2019 - 2020. This storage can be readily expanded in future. The siloes can be filled either directly by trucks from external storage or from nearby bunkers. The silo design includes belts, gantries, services, framework, conveyors, piling and concrete works and is based on ‘off the shelf’ solutions.

Handling facilities at the port have been designed to be competitive and efficient for the long-term.

They consist of a dual hopper, which can facilitate two-truck simultaneous discharge of 500 tph each feeding into a conveyor loading system.

The hopper feeds a 1000 tph conveyor system which feeds directly to the loading conveyor.

The nearby Lucky Bay bunker site will have 360 000 t of bunker storage, dual-automated 40 m weighbridges and two dual-sided sampling offices with automated probes.

Surveyors have been at both the Lock and Lucky Bay bunker sites in recent weeks, mapping out construction and boundary parameters.

T-Ports General Manager Operations Tim Gurney and Chief Executive Officer Kieran Carvill met with Member for Flinders Peter Treloar MP recently to discuss plans for the Lucky Bay and Lock sites. The Flinders electorate encompasses a large proportion of the Eyre Peninsula so it is important to keep local representatives updated on the project.

T-Ports management also met with Member for Giles and Shadow Minister for Primary Industries and Regional Development Eddie Hughes, who is based in Whyalla.

Read the article online at: https://www.drybulkmagazine.com/material-handling/05062018/t-ports-provides-update-on-lucky-bay-project/

This is the company’s ninth vessel acquisition of 2021.