A global provider of quicklime and chalk products has resolved a significant fugitive material problem by implementing state-of-the-art containment and dust suppression on one of its primary limestone conveyors. 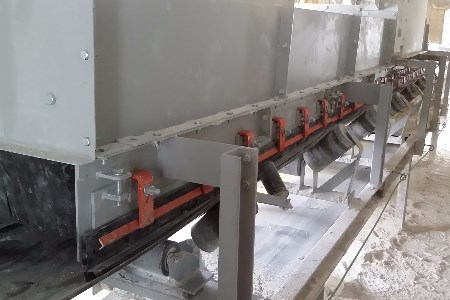 After finding that an estimated 10 – 20% of the material load was spilling along the belt path, Singleton Birch implemented a control strategy from Martin Engineering that included a rebuilt transfer point as the material takes a 20 ft drop from one belt to another. Once the upgrade was complete, the air inside of the conveyor enclosure was clear enough to see down its entire length, with dust management so complete that at first remote operators questioned whether the material flow had resumed or not.

Singleton Birch supplies products and services for steel production, land stabilisation, acid neutralising, water treatment and building mortars. The limestone is extracted from the Melton Ross Quarry a short distance away and transported to the processing facility, where it is crushed to 150 mm minus (6 in. minus) and transferred to the kiln.

Passed through the twin-shaft parallel-flow regenerative kiln running at about 1000°C (1832°F), the calcined soft-burned lime is discharged into another crusher and reduced to 50 mm minus (2 in. minus), and then either deposited into hoppers for bulk delivery or transferred to the GLC1 conveyor. This system transports the limestone to conveyors leading to either the crushing and screening operation or the milling plant.

The company currently produces 1.5 million tpy (1.65 million short tpy) of processed limestone and chalk, as well as approximately 300 000 tpy (330 700 short tpy) of calcium oxide products. Although the existing enclosure confined the fugitive dust, many serious issues arose due to the sheer volume and density of the particles. The abrasive particles would get into the bearings of rolling components and cause them to seize, leading to increased friction on the belt – a potential fire hazard. Dust would also build up around the loading zone and encapsulate the tail pulley, eventually causing the belt to just slide over the built-up material rather than riding on the rollers, which fouled the return side of the belt and the face of the tail pulley. Fugitive material would travel freely throughout the long tunnel, piling up and restricting access for maintenance workers to address these issues.

“The encapsulation and equipment failure issues really took a toll on the system,” explained Oliver Whelpton, Process Optimisation Specialist at Singleton Birch. “We first tried to mitigate the dust using mechanical filtration systems mounted on the top of the loading chute, but the filters clogged so quickly, maintenance became a burden.”

According to Whelpton, to maintain normal operation of the system and avoid serious hazards, the area needed to be cleaned by two workers once per week, requiring nearly an entire shift. Before engaging in what he described as a “substantial undertaking,” the system had to be shut down so workers could see. Anyone entering the enclosed area was required to wear personal protective equipment (PPE), including breathing masks with respirators and hooded suits to protect against airborne particles.

Since Martin Engineering has a division in nearby Nottingham, managers asked local representatives to draft a proposed solution to the GLC1’s issues. According to James Kevill, the Martin Engineering Technician who led the inspection and installation, “A local contractor and I took measurements and then created a detailed design overhaul. The goal of our proposal was to contain the dust at the point of production by creating an environment that would quickly settle agitated particles and return them to the cargo flow to control spillage and improve air quality.”

The plan included raising and lengthening the existing chute to create a more robust settling zone. Using 2.5 t (2.75 short t) of steel, the contractor fabricated a 4-meter-long (13 f) chute extension and tail box. The overhaul integrated Martin® ApronSeal™ Double Skirting HD and an EVO® External Wear Liner to protect the chute wall and seal in the dust, with a series of dust curtains at the end.

The new design raised the chute 102 mm (4 in.) from its previous position to accommodate the new wear liner. Mounting brackets with jackscrews provided a secure mount, with precision adjustment of the wear liner to reduce spillage. This system closes the gap between the liner and the sealer, thus eliminating abrasion from trapped material without interfering with existing supports. When accompanied by the skirting and clamps, the system forms a tight belt seal, delivering outstanding fugitive material control. Special mounting tabs allow the liner and skirt seal to be adjusted or replaced from outside the chute, requiring no confined space entry.

According to Whelpton, spillage and accumulation along walkways and around the mainframe have been eliminated. There has been no encapsulation of the belt or tail pulley since installation, and rolling components are far less prone to fouling due to dust and spillage. Protective suits are no longer required for people to enter the area, as they need only PPE masks to protect against trace particles emitted through normal operation.

In addition to the complete turnaround of the operating environment and its effect on morale, managers were impressed by the reduced labour costs and improved safety due to external adjustment and replacement of the chute’s wear parts. Operators report the cleaning and maintenance schedule has been adjusted accordingly, freeing up staff for other assignments. The time and cost for replacement of rolling components and chute accessories is a fraction of what it used to be.

Read the article online at: https://www.drybulkmagazine.com/special-reports/15122017/controlling-fugitive-dust-at-a-limestone-conveyor-transfer/

Horizonte Minerals has entered into two long-term port agreements for its Araguaia Nickel Project in Brazil, securing the import of raw materials and the export of its final nickel product.