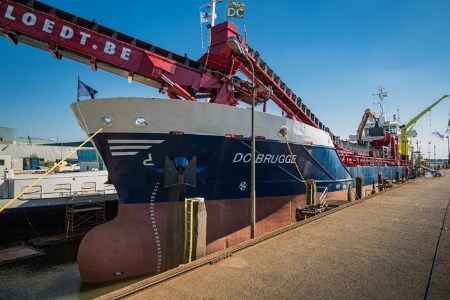 The new CCTV system will provide assistance in managing dredging operations, as well as enhance overall security aboard the ship. It consists of a total of eight outdoor and indoor cameras and network equipment, including two marine dome cameras.

Jerry de Jong, Electro-technical Designer and Engineer with Kooiman Marine Group, was responsible for the conversion and was closely involved in the selection process for the new CCTV system. “The old television system on the vessel was not really state-of-the-art to support dredging operations. For the conversion, we examined several potential suppliers for a new system. We met Siqura at a professional exhibition and visited them soon after.

“During our visit to Siqura we were extensively briefed on all options for CCTV and given a presentation for a possible set-up of a CCTV system for the converted ship. I was impressed by Siqura’s professionalism and the high quality of its products. As they were looking to expand in the shipping market – as part of their activities in marine, oil and gas – they made us an attractive offer. Siqura’s quality was most important but price was also a factor.

“The new CCTV system was installed during the ship conversion. It was commissioned early July 2018. The system is a combination of outside and inside cameras: one Marine Dome Camera each on the forward and aft masts, two full HD fixed cameras under the bridge, two cameras in the engine room, one fisheye camera in the pumping room and one camera on the ship-to-shore conveyer belt.”

Read the article online at: https://www.drybulkmagazine.com/shipping/12072018/siqura-installs-cctv-system-aboard-kooiman-marine-group-trailing-suction-hopper-dredger/

CD Cargo, in cooperation with other partners, has taken the first train with corn from the Ukraine to the German port of Brake.