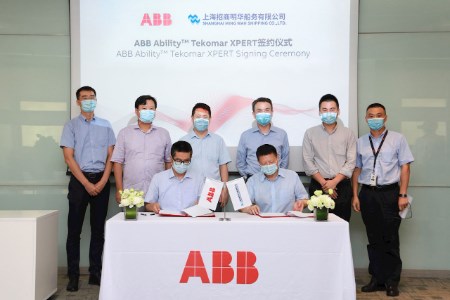 ABB is to install its engine diagnostics software ABB Ability™ Tekomar XPERT on 12 bulk carriers operated by Shanghai Ming Wah Shipping Co. The fleetwide deployment follows a trial on two ships which started in February 2019 and an initial order covering four vessels in June 2019. The order for the remaining eight vessels was received in July this year.

Under the initial order, ABB Ability™ Tekomar XPERT helped Shang Ming Wah save 0.62 tpd of fuel on each of the four ships. One vessel, with a MAN B&W 6S42MC main engine, recorded a fuel saving of 4.3 g/kWh, highlighting the significant fuel consumption advantages the software can bring to high-powered engines in particular. The lower fuel use will lead to a dramatic improvement in environmental performance, reducing fleetwide CO2 emissions by an anticipated 5800 tpy.

Xu Gang, Head of Services for ABB Turbocharging in China, said: “In an increasingly digital world, we continue to seek technological innovations to provide customers with more advanced solutions such as Tekomar XPERT. ABB Turbocharging and Shanghai Ming Wah have established a good foundation through many years of cooperation, and this agreement has further strengthened our collaboration.”

Tekomar XPERT empowers ship owners and operators with key engine indicators provided via intuitive dashboards, allowing them to monitor, optimise, and benchmark engine performance while preventing engine problems. It runs on any engine, regardless of type or age and is built on ABB’s Ability platform with the highest standards of cyber security.

Read the article online at: https://www.drybulkmagazine.com/product-news/21092020/shanghai-ming-wah-installs-abb-software-on-12-bulk-carriers/