ABP has invested over £1 million on a rooftop solar project at the Port of Goole, which will generate enough clean energy to power the port on solar alone during peak generation times. 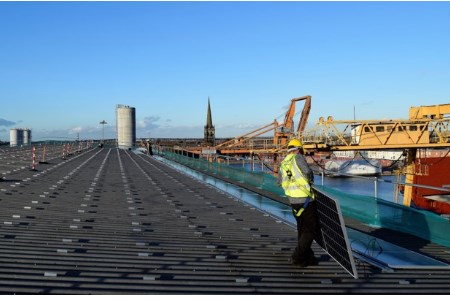 In total, the major project will see 4341 solar panels installed on four rooftops across the UK’s most inland port, Goole, and it will produce enough electricity (1.1 MW) to power around 154 residential homes per year. Surplus supplies will be exported to the grid for external use.

Britain’s biggest ports operator, ABP, is on track to become one of the largest corporate solar producers in the UK, and recently the Port of Immingham has upped its solar production to over 4 MW and was recognised for its green efforts at the Solar Power Portal Awards winning Commercial Roof Top Solar Project of The Year 2018.

Goole and Hull Port Manager, Chris Green, said: “We’re proud that the UK’s most inland port, Goole, will be a significant renewable energy generator in its own right. We still have enormous potential to further develop our ports to generate yet more clean energy, reducing the carbon footprint of our businesses and of our customers’ operations.”

The first installation is taking place at the RMS Boothferry Terminal, in preparation for the sunny summer months.

The UK’s leading commercial solar installer, Custom Solar, is heading the 12-week programme. Custom Solar Director, Gary Sucharewycz, said: “It’s fantastic to be working on another project with ABP Humber. Following the recent success of projects at the Port of Immingham and other ports across the wider ABP group, this recent installation at the Port of Goole is another positive step as ABP implements solar generation across all ports. Works have already started on site at Goole and we look forward to completing and commissioning the project prior to the end of 2018.”

Read the article online at: https://www.drybulkmagazine.com/ports-terminals/16112018/port-of-goole-to-power-site-through-solar-generation/