Peel Ports has revealed its plans for the major port and industrial centre at Hunterston, one of Scotland’s most important development sites comprising a 300 acre brownfield footprint, deepwater, and rail connections. 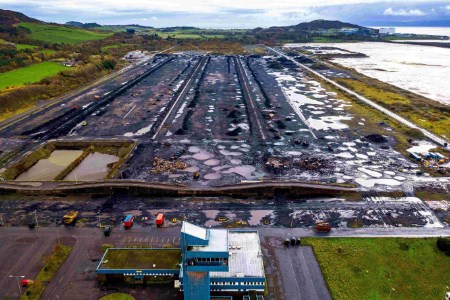 It is calling on North Ayrshire residents and businesses to share their opinions about potential uses of the site, which is expected to support over 1700 jobs and add over £140 million in economic value to Scotland.

The company has published its vision for Hunterston and how it intends to develop the site over the next 20 years. The details are contained in a master plan, published on Thursday 16 May at the beginning of a six week consultation process.

“The intended benefits that we have set out can only be achieved with the input of the local community, public sector agencies and commercial partners. That will help us to create a final version that reflects the shared ambitions of the people who live, work and invest in North Ayrshire.”

Kenneth Gibson, MSP for Cunninghame North, said: “Our young people need opportunities for high-quality, skilled jobs and I am determined to see those brought to Hunterston. It is a prime site for investment in infrastructure and attracting new companies that will provide such roles.

“Developing the site is also a one-in-a-generation chance for the region to lead the way with innovative and sustainable industries, potentially in the circular economy or renewable energy. One thing is for sure is that we much create a new future for employment in the region otherwise we will continue to see a drain of talent to Glasgow and beyond. I urge everyone with an interest in the health of North Ayrshire to read the masterplan and get involved in the debate.”

In recent years, the Government has changed its preferred energy policy from fossil fuels towards renewable resources. The result is Hunterston Port’s role, as a major importer of coal previously burnt in Scottish power plants, is now obsolete.

Peel Ports has already worked with North Ayrshire Council, Scottish Government, Scottish Enterprise and many businesses in preparing the Master Plan and is now consulting with the public and others stakeholders about the next steps.

Karen Yeomans, Executive Director of Economy & Communities at North Ayrshire Council, said: “This is exciting news and I’m delighted to see the Masterplan unveiled to help unlock the vast potential held by the Hunterston site. We want North Ayrshire to be a vibrant, outward-looking and confident region that is an even better place to live for our communities and attractive to both investors and visitors, and these proposals will play a significant part of achieving that ambition.”

The Master Plan, which is not legally required and is not a substitute for planning or other regulatory permissions, sets out:

Among the potential uses put forward in the plan are:

Hunterston PARC has the potential to support sustainable North Ayrshire communities for generations to come by:

Peel Ports will publish a revised adopted master plan, taking into account all feedback in 2020.

Read the article online at: https://www.drybulkmagazine.com/ports-terminals/16052019/peel-ports-sets-out-future-for-hunterston-parc/