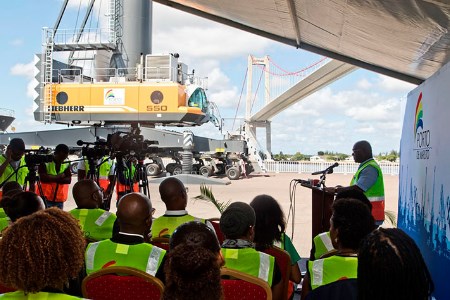 Maputo is the capital of the East African state of Mozambique. The port city on the Indian Ocean is one of the most important transhipment points for goods of all kinds on the east coast of Africa. The central port operator, the MPDC, already invested in two Liebherr LHM 550 in 2015. Due to the high satisfaction and convincing productivity of the existing LHM 550s, Maputo Ports recently decided to add two more LHM 550 to their MHC fleet.

The remarkable growth of the Port of Maputo and its activities in recent years and the increasing demand from its customers have been the key drivers in the choice of the Mobile Harbour Crane number 3 and 4. Especially in the Port of Maputo, the LHM 550 is the perfect crane when it comes to high professional bulk handling. Its high capacity and fast movements offer an outstanding productivity, also of high density bulk material like ferrochrome, which is one of the main products being handled at Maputo Ports. The two existing cranes have proven to be drivers of productivity growth. By adding another two units to the fleet, Maputo Ports is prepared to continue its successful development in the future.

The investment in equipment also includes the training of several operators and technicians for the handling and maintenance of the new machines. In addition, the existing service contract between Liebherr and Maputo Ports was extended to include the new devices. Liebherr thus guarantees the best possible reliability and availability of the cranes.

“In addition to the two mobile harbour cranes, we have recently acquired 14 payloaders, eight tractors, eight forklifts and two rail excavators (for wagon unloading operations). This investment is in line with the need to improve the berth usage and the rehabilitation and deepening works that are taking place at the moment,” said Chief Operations Officer, Marla Calado.

First Liebherr branch outside of Europe

Liebherr Africa was built in 1958 and is the first Liebherr branch outside of Europe. Liebherr Africa has its main basis in South Africa with more than five branches and nearly 500 employees. Since 2011, the company Liebherr Mozambique is in place, allowing Liebherr to be at site with shortest distance to its customers. Liebherr has a long-term commitment to local markets and this applies in particular to Mozambique with its great potential for future growth and development.

Read the article online at: https://www.drybulkmagazine.com/ports-terminals/15052019/maputo-ports-adds-two-more-liebherr-lhm-550-cranes-to-fleet/