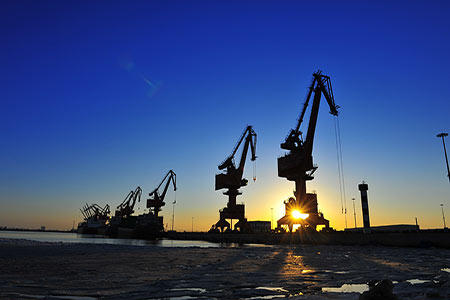 Kamigumi will establish a terminal operating company named International Bulk Terminal (Thilawa) Co. Ltd (IBTT) – mainly focusing on the handling of grain, feed and other bulk cargo at the Thilawa region of Yangon port in Myanmar as a joint venture with Lluvia Limited of Myanmar, which is a joint venture between Mitsubishi Corp. of Japan and Capital Diamond Star Group (CDSG), a conglomerate in Myanmar.

Myanmar continues to see robust economic growth underpinned by growing investments being made by foreign companies driven by the country's democratisation and economic deregulation. Myanmar's per capita consumption is also increasing rapidly, and with the Westernisation of diets and greater diversity of food choices, continued growth is expected in the trading of food products and raw materials in the future.

Given this environment, Kamigumi will establish IBTT together with Lluvia by harnessing its track record in handling grain and feed at its owned and operated port facilities across Japan and by taking full advantage of its many years of know-how in the sector.

Lluvia is a food company with manufacturing and sales operations covering multiple sectors of the food industry. Lluvia is particularly renowned in its leading position in flour milling where it maintains the largest market share in Myanmar. By developing and operating a port facility through IBTT, Kamigumi will be able to secure an advantageous position in handling of bulk cargo such as wheat grain in Myanmar, and establish a solid foothold in the food logistics business, which is expected to see further growth going forward.

Furthermore, Kamigumi will seek to expand its logistics business in Myanmar and contribute to the development of logistics functions in the country through the synergies realized between IBTT and Kamigumi-EFR Logistics (Myanmar) Co. Ltd a logistics company already established in Myanmar by Kamigumi.

Read the article online at: https://www.drybulkmagazine.com/ports-terminals/12122017/kamigumi-to-create-a-bulk-terminal-at-thilawa-port-in-myanmar/