The Maritime Office in Gdynia (Poland) has awarded the joint venture BESIX – NDI GROUP the contract to build a shipping channel through the Vistula Spit, a peninsular stretch of land, separating the Vistula Lagoon from the Gdansk Bay. 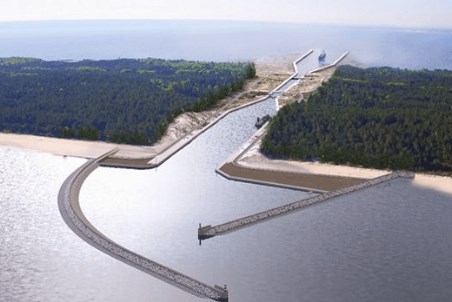 New infrastructure, designed by engineering consultants Mosty Gdansk and Projmors, will ease the maritime traffic and boost Elblag’s port installations by drastically reducing the distance between the port and the Baltic sea and making it accessible to larger vessels. In addition to the port, the project is expected to have a positive influence on the employment rate and on the economy of the Warmia-Mazury Province.

The contract was signed on the 4 October 2019 and amounts to €187 million. The project is financed by the Republic of Poland.

The works include the construction of two breakwaters, a channel, two rotating bridges over the lock, four sluice gates, buildings, landscaping as well as the adjacent roads and the soil reinforcement of the roads embankments. Also, the companies will build 190 ha of artificial island within the Vistula Lagoon.

The channel stretches over 1.5 km with a width varying from 25 - 120 m. It is equipped with 61 m long and 17 m large rotating bridges, while the associated buildings will cover an area of 1090 m². Located outside the spit in the Gdansk Bay, the two breakwaters have respective lengths of 1014 and 568 m and form a protective harbour.

Works are expected to start in 2019 and be completed in 2022. The joint venture will ensure the continuity of traffic on the existing provincial roads throughout the construction period. Shipping channel through the Vistula Spit.

With regards to marine infrastructure works, BESIX has built multiple channels and locks in Belgium and in the Netherlands over the last 100 years. The company also builds major breakwaters and protective harbours, with recent projects in Europe, the Middle East, Africa and Australia. In Poland, BESIX and NDI have built amongst other the second Gdansk Container Terminal, in 2015 - 2016.

The contractors have a renowned expertise in building infrastructure that comply with the highest environmental standards. This is the case of the Princess Mary Bridge, which has recently been inaugurated on 28 September 2019, a dual carriageway and a high bridge in a Natura 2000 area in Denmark, one of the most demanding countries regarding environmental norms. It notably required to strictly adapt the works to the vegetation and the land- and water wildlife.

Similar measures will be rigorously applied on the Vistula Spit. For example, these include to adapt the planning and the works to the birds and bats breeding seasons and to the fish spawning periods. On a technical level, the companies will use construction technologies that drastically reduce the need for drainage construction and the range of water turbidity, as well as the working methods and equipment which cause the lowest possible amount of noise, vibrations and waves.

The construction facilities and operations will also be adapted, for instance by strictly restricting them to the working area or using appropriate lighting in order to minimise disturbance for nocturnal animals (LED luminaires with an angle of inclination from 0 - 15° and a temperature of 3000 - 4000°K).

The approximately 180 ha artificial island will serve exclusively as a natural area, a sanctuary for the local wildlife and migratory birds.

Read the article online at: https://www.drybulkmagazine.com/ports-terminals/09102019/major-marine-infrastructure-work-in-poland/