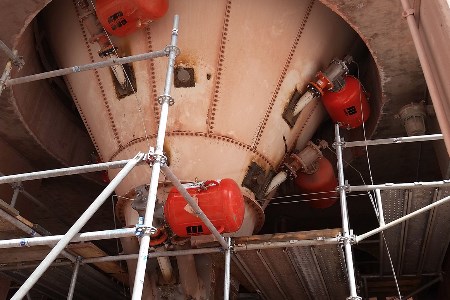 The Drake Cement facility ten miles north of Paulden, Arizona, US, was experiencing clogging issues on a weekly basis, forcing maintenance personnel to spend up to 12 hours to clear the blockage using tools and compressed air. During damp weather, the problem worsened, and at times the large structure would fill in as little as two hours, forcing operators to use CO2 blasting tubes every 15 to 30 min.

Technicians from Martin Engineering were able to clear the blockage on a short-notice visit, and then revised the site’s air cannon system to prevent the issue from recurring.

A key component of Drake’s dry-process manufacturing is efficient material flow. Excessive rain in the months of January through to March caused the limestone being extracted from the nearby quarry to have elevated moisture levels. Not only does the rain cause standing water, but the limestone is also wetter coming out of the ground.

Little of that water is lost in the crushing process, and dry material can absorb moisture as it is reduced in size. So in the winter months, by the time the material lands in the 536 short t (486 t) limestone silo, it is nearly saturated. In previous years, the silo had not experienced a single flow disruption, nor had it required cleaning due to the aid of two Martin® XHV air cannons. Adequate in previous years to keep material flowing at required volumes through all seasons, the air cannons were unable to prevent clogging at such high moisture levels.

“This plant is one of the most advanced operations of its kind, with advanced operating and pollution controls found in only a few other facilities in the world,” explained Jose Venegas, Maintenance Manager at Drake Cement. “I had a Martin representative coming out to look at another part of the plant, but when the silo clogged, that took immediate priority. The problem had become disruptive, expensive and hazardous. We needed it solved once and for all.”

When Martin Engineering National Business Development Manager Doug Brown arrived at the plant, he found a silo so compactly clogged that it had halted the entire production process. “Inspecting the silo for a solution, we realised that the limestone could be packed like snowballs, dense enough to stick to the wall when thrown,” said Brown. “This demonstrated just how serious the problem was. We luckily had a silo cleaning crew that had just finished a job in Tucson, AZ, so they were quickly dispatched north to the plant.”

The experienced two-man crew immediately set up a Martin® Heavy Duty Whip. Powered by compressed air, the device can be equipped with a variety of flails and cutting edges to knock down accumulated material without damaging the silo’s walls or support structure. Requiring no confined space entry, the device was set above the manhole opening at the top of the vessel and manoeuvred by remote control.

“Working together with the electrical and maintenance departments, we were able to continue operations during the cleaning process,” Venegas said. “This really helped us avoid what could have been some costly downtime.”

Once the silo had been completely evacuated, Brown – a flow aid specialist – realised that the ongoing problem could be remedied by utilising Drake’s current stockpile of air cannons. Using an innovative placement strategy, Brown was certain that the cannons could safely prevent buildup and promote efficient high-volume material flow, no matter how moist or dense the limestone.

Rather than the two cannons at the bottom of the limestone silo firing across the cargo flow, five cannons were strategically placed around the vessel. Three 70-liter Martin® Tornado Air Cannons were placed on the lower incline of the cone at a 30º downward angle against the 60º slope in the 6 and 12 o’clock positions (one side of the silo was inaccessible). In the 3 o’clock position, one air cannon was situated at the 2 ft wide shaft, and another was added to the upper silo to aid in loosening material.

Already fitted with 53 XHV and Tornado Air Cannons throughout the plant, a programmable logic control (PLC) system centrally placed in the facility coordinates and monitors the timing and firing sequence of each unit at all locations, including the limestone silo. During the wet winter and monsoon months, the cannons are activated approximately every hour, but throughout the rest of the year the system has a firing sequence of only 4 – 5 times per day. This pattern can also be manually activated from the weigh feeder, at the solenoid panel or in the control room.

Since installation, plant production has returned to normal levels. Material flow is ongoing, and the silo has not been shut down for cleaning. There has been no unscheduled downtime due to clogging, which has greatly increased production, especially through heavy weather periods. The use of CO2 tubes has been ceased altogether. When a buildup is detected, workers no longer are required to get close to the area to resolve it, increasing plant safety and reducing the number of man-hours required to maintain the silo.

“This equipment upgrade has paid for itself many times over,” Venegas said. “We are extremely happy with the results. The service was fast, responsive and well coordinated. During our next scheduled outage, we’re going to have a Martin Engineering team out here to consult on other areas where we might need air cannons, so that we can maximise production. We look forward to an ongoing and productive relationship.”

Read the article online at: https://www.drybulkmagazine.com/material-handling/22052017/martin-resolves-material-accumulation-in-arizona-cement-plants-limestone-silo/