At the end of 2012, SCHADE Lagertechnik won one of the biggest orders in the history of the company, when Formosa Heavy Industries contracted 21 machines for the new Ha Tinh steelworks in the province of the same name in central Vietnam. The project was one of the largest greenfield ventures in the steel industry anywhere in the world. Commissioning of the machines took customer requirements into consideration at every step and has been completed to the utmost satisfaction of all parties. 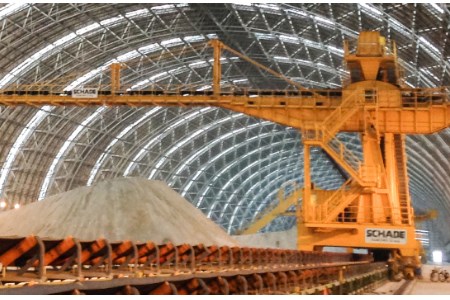 The SCHADE supply package comprised two tripper cars for the coal-fired power plant and four for the steel plant. Each of them has a capacity of 4600 tph. In addition Ha Tinh took delivery of six semi-portal reclaimers, with rail spans of 40.7 m and a reclaim capacity of 2000 tph each.

In the steel plant, a portal reclaimer with a rail span of 48.5 m and a capacity of 1200 tph will be used, alongside two stackers with capacities of 300 tph and 3200 tph respectively.

Read the article online at: https://www.drybulkmagazine.com/material-handling/16112018/major-supply-package-from-schade-commissioned-for-formosa-heavy-industries/