A global leader in the manufacturing of high quality electric vibrators for improved bulk material flow has helped a fleet of dump trucks improve material evacuation and efficiency with longer lasting and more reliable industrial vibrators to ensure that each load is delivered completely and safely. 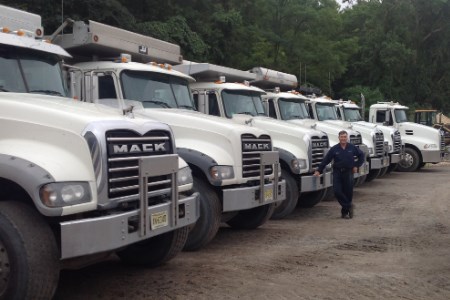 To avoid potential risk from operator intervention to break loose stubborn materials and facilitate complete unloading, Herman’s Trucking Company of Wrightstown, New Jersey (USA) orders its truck bodies with OEM-supplied vibrators. Company officials were disappointed in the short lifespan of the units, however, which were only lasting about a year.

Since 1973, Herman’s Trucking Company has been serving the Burlington County area in Central New Jersey. With a sizeable fleet of more than 25 dump trucks, the company hauls everything from landscaping material to construction products. Commonly transported loads include slate, flagstone, rocks, limestone, recycled aggregate, dirt and sand.

Material build-up on the walls, floor and tail gate of the truck bed can reduce the capacity of each load, extending unloading time and reducing efficiency.

“Sand and gravel need to be absolutely cleaned out after every load,” said Bruce Stelljes of Herman’s Trucking Co. “The driver has to make sure the truck body is clean and if it isn’t, he or she has to get up there and hammer on the truck body or even climb into the bed with a shovel and manually dislodge any remaining material.”

Drivers commonly use a number of other methods to evacuate the cargo box, all of which can introduce problems. One is stopping and starting the hydraulic lift to shake loose the accumulation, slamming the cylinder open and closed to dislodge the load, which can cause stress on the lift shaft, hydraulic fittings and other components. Another is moving the truck back and forth in a stopping/starting action with the bed raised. This wears on the brakes and engine, and trucks with raised beds can become severely unbalanced on uneven surfaces. Even on level ground, if one side of the bed empties and material sticks on the other side, the truck can be in danger of tipping over.

Perhaps the most dangerous approach is the operator climbing up and manually clearing the buildup. Often performed with the bed at a slight slope that introduces the possibility of slips or falls, the loosened material can evacuate suddenly, pulling the worker with it, resulting in possible injury.

“We first discovered the Cougar vibrators about six years ago, when we received a new truck body equipped with a Cougar 2500,” Stelljes continued. “We noticed that the unit consistently delivered the force we needed without burning out.”

Stelljes said that original unit is still working like new.

“At the time, we didn’t know much about truck vibrators,” said Stelljes. “We had purchased new trucks that had another manufacturer’s vibrators installed on them. But after just a year or so in service, those units started going bad.”

Stelljes said they either suffered from a reduced output or stopped working altogether. Operators originally swapped the failed vibrators for new ones by the same manufacturer, but the short equipment life persisted, resulting in drivers again having to take measures to clear the material. After seeing the side-by-side comparison of performance and equipment life between the Cougar DC 2500 and the competing units, the company decided to exclusively use the Cougar designs.

“The true cost of these vibrators is directly dependent on how long they last,” explained Martin Engineering Mobile Market Manager Allen Twidell. “The Cougar family of truck vibrators includes heavy-duty windings and insulation, with bearings lubricated for life and sealed inside a weatherproof housing.”

The motors are custom-built to Martin Engineering’s specifications, ensuring the highest level of quality control. The units also carry a two-year warranty, which is double that of other 12 V truck vibrators.

“We’ve found that some competing designs don’t actually achieve the forces claimed by the manufacturer,” Twidell continued. “In contrast, our units generally put out more energy than the model numbers indicate.”

The Cougar lineup of DC truck vibrators also includes a larger unit, which puts out a whopping 3700 lb of force.

Placed on the upper spine of the truck bed’s support frame, the compact unit on Herman’s trucks requires minimal space. The design is only 10-3/8 x 9-3/4 x 6-7/8 in. in size and weighs just 36 lb due to the lightweight aluminium housing, which results in a high output to weight ratio. Drawing just 55 amps, the powerful vibrator delivers 2500 lb of force at 4000 RPM. Competing products typically draw much more current (well in excess of 100 amps), which means the Cougar units produce less drain on the truck’s electrical system. The duty cycles are also longer, generating less heat, which contributes to their long life.

Read the article online at: https://www.drybulkmagazine.com/material-handling/11042019/hermans-trucking-company-shakes-off-low-quality-truck-vibrators/