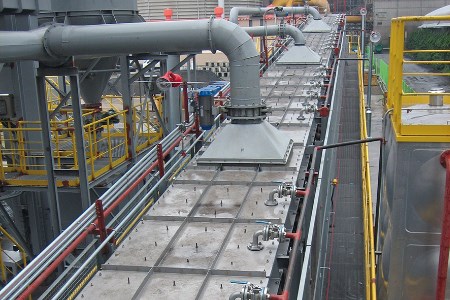 The greenfield project will utilise the existing port infrastructure on Lake Erie, and MIDREX was selected as general contractor to supply the direct reduction plant.

German conveying equipment specialist AUMUND, as subcontractor to MIDREX, is supplying one of the most important elements of the whole process, the HBI cooling lines. The decision-makers involved in the project have given their vote of confidence to the evaporation cooling process patented by AUMUND. In this HBI slow cooling process, the HBI product to be conveyed is cooled from 750°C to 90°C in a process, which protects the integrity of the product. AUMUND guarantees a handling throughput of up to 285 tph at a nominal conveying capacity of 142 tph.

The first installation of its kind was successfully completed by AUMUND in Venezuela in 2006. After this pilot project, AUMUND won further HBI orders in Russia and the US. “Today, after constant optimisation of details, the technology has reached such a state of maturity that both operators and general contractors increasingly favour the AUMUND solution over traditional methods”, says AUMUND’s Sales Director Metallurgy, Matthias Moritz.

Cleveland Cliffs Inc. is one of the largest iron ore producers in the US, with mines and pelleting plants in Michigan and Minnesota, as well as in Western Australia.

Read the article online at: https://www.drybulkmagazine.com/material-handling/09042018/cliffs-to-receive-hbi-cooling-lines-from-aumund/