Dos Santos International has been awarded a contract to provide their DSI sandwich belt high-angle conveyor to Bedeschi S.p.A. for the Yara Sluiskil project in the Netherlands. 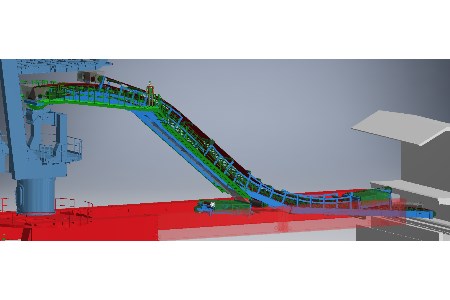 The DSI sandwich high-angle conveyor will transfer urea and amidas prills at a rate of 600 tph at a 40° angle. The material will be transferred from the tripped dock conveyor and elevated to the shiploader boom conveyor. The sandwich conveyor discharge is centred on the bridge rotation axis of the boom, allowing the boom to rotate freely. DSI was awarded supply of the sandwich conveyor by Bedeschi, who was awarded the contract for the supply of the ship loader for the plant in January 2017.

DSI sandwich belt high-angle conveyors take on many forms and offer many advantages. Each DSI sandwich conveyor uses two standard, smooth-surfaced conveyor belts, face-to-face, to gently but firmly contain the product being carried. This not only makes steep angles possible. It also offers a spillage-free, environmentally-sound operation because the material remains sealed between the carrying and cover belts. The use of all conventional conveyor parts ensures high-availability and low-maintenance costs, as well as interchangeability of components and fast delivery of replacement parts. A DSI sandwich conveyor is capable of higher conveying speeds and greater capacity than other high angle conveying methods. The availability of wide belts and hardware makes capacities greater than 10 000 tph easily achieved with a DSI Sandwich conveyor. High angles of 90° are typical, and lifts of 300 m are easily accomplished.

Read the article online at: https://www.drybulkmagazine.com/material-handling/06062017/dos-santos-international-to-supply-high-angle-conveyor-for-yara/

The European Commission has responded to a request from North Sea Port to extend the rail freight corridor between the North Sea and the Baltic Sea to the Ghent-Terneuzen Canal Zone.