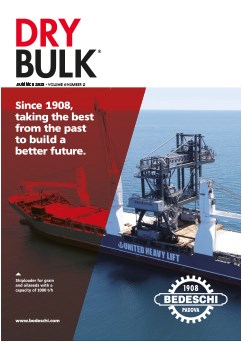 When reeling off aspects of the dry bulk industry, what springs to mind includes the skilled material handling for loading/unloading ships, the technology required at ports to co-ordinate with vessels, the variety of vessel sizes and designs for specific cargoes, the meticulous requirements for storage and silos, etc.

Personally, one of my last considerations would be the actual powering of a vessel and the not-so-sustainable fuels involved, and it seems I am not the only one failing to consider this vital aspect. According to research, the marine shipping sector emits approximately one billion tpy of greenhouse gas emissions. Since marine transport equates to 80% of global trade, decarbonisation of this sector is a must, and emissions can largely be eliminated by shifting away from heavy fuel oil and utilising zero carbon fuels such as hydrogen and ammonia, or low carbon fuels such as LNG.

In November 2020, the International Maritime Organization (IMO) agreed to introduce a new technical measure for in-service vessels – called the Energy Efficiency Existing Ship Index (EEXI). Essentially, this measure will require all cargo vessels in operation to limit the amount of carbon dioxide emitted per unit of transport supply. Assuming the technical measure is adopted this month at the Marine Environment Protection Committee (MEPC), EEXI’s requirements will come into force in 2023.

Not only are regulations such as the EEXI encouraging decarbonisation of the industry, there is also pressure from charterers and banks because of contracts and financing. The organisation BIMCO has announced that its experts have begun preparing clauses to assist owners and charterers adhere to the upcoming carbon regulations. How the regulation is set to play out, it may see shipowners having to lower their cargo intake as well as introduce slow speeding measures, all to ensure compliance with the carbon rules. BIMCO’s experts understand that charter party clauses are going to be essential going forwards because it may be the case that some shipowners risk breaching their obligations in performing their voyages under the standard charter party terms.

As mentioned earlier, utilising alternative fuels for marine fuel will be a significant step towards improving the sector’s sustainability. According to IMO data, bulk carriers and container ships consumed 118 million t of heavy fuel oil-equivalent fuel in 2018 – which represents half of the marine shipping sector’s total fuel consumption. DNV has noted LNG, LPG, methanol, biofuel, and hydrogen as the most favourable alternative fuels for shipping, and this knowledge is prompting positive action throughout the sector. One such example is shipping and transportation company CMA CGM, which has invested deeply in a major programme to use LNG powered vessels. The company notes that LNG is an ideal transition fuel and will help reduce greenhouse gas emissions incrementally until zero carbon fuels get their time in the limelight.

In anticipation for the EEXI’s arrival, news of technologies and design developments to accommodate alternative fuels in dry bulk carriers should become more commonplace. In fact, as I write this, Newport Shipping has announced it has developed an LNG fuel tank system for Capesize class vessels and received an Approval in Principle to facilitate retrofits on these vessels, which will assist in the universal aim to cut maritime emissions. It appears that the next two years will be a time for much innovation for the bulk carriers responsible for such a large portion of global trade.