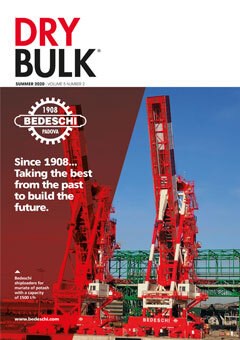 And then 2020 spiralled even further. Just as lockdowns around the world have started to ease and governments look to ride their flattened curves back to normality, unrest breaks out. Thousands of protesters have taken to the streets of not just US cities, but those in the UK, Germany and New Zealand also, demanding justice for the death of George Floyd at the hands of the Minneapolis Police. With the President being censored by Twitter for glorifying violence and now threatening military action on the street, these truly are frightening times.

While the battle against racial injustice continues to burn, the dry bulk industry, like so many others, stares down the hot embers of COVID-19. The pandemic’s impact on the dry bulk shipping market at the start of the year was devastating, with all sectors making losses. According to research by BIMCO, despite China – the industry’s biggest driver – returning to work, there is unlikely to be any form of rapid recovery from the crisis as it remains unclear just how little demand there could be for dry bulk materials following the collapse of industries such as the automotive industry and aluminium. BIMCO has forecast that trading in all commodities including coal, steel and iron ore will fall as a result of people being in generally poorer financial situations and therefore reluctant to invest in ‘durable goods’.

Ports around the world are feeling these effects as well. The British Ports Association (BPA) has reported that 86% of ports in the UK have felt either severe or substantial impact on customer activity, and that 44% have had difficulty accessing the correct PPE. The BPA has even stated that the pandemic will likely cause more uncertainty on the future of port operations than Brexit, the possible impacts of which have been debated relentlessly since the 2016 referendum.

There have been some success stories in the port world, however. Sweden’s Port of Gothenberg – the country’s largest – has reported next to no real impact on freight volumes. Elvir Dzanic, Gothenburg Port Authority Chief Executive, stated: “We have focused firmly on keeping the port open and we have managed to do so successfully. This has always been our strategy. Large parts of Sweden have remained open and productive during the pandemic, and coronavirus has not had any tangible impact on Q1 volumes.”1

The large cloud hanging over Gothenberg’s freight volume success though is Sweden’s dependence on the rest of the world for trade, which means it will likely be swept up in the demand shock for commodities that is predicted to ensue post-COVID.

The state of trade is not the only concern either. In a joint letter to the UN Secretary General António Gutteres, the leaders of the International Chamber of Shipping, International Trade Union Confederation and International Transport Workers’ Federation urged action to ensure crew changes happen for the 200 000 seafarers currently working on vessels at sea, to avoid what they called a ‘humanitarian crisis’. As many workers have worked beyond their contracts but are unable to return home, concerns have arisen over crew’s mental and physical health. The industrial and shipping organisations highlight in their letter that global trade will suffer in the long term and potentially even close down as a result of crew exhaustion if measures aren’t taken by the UN.

It is hard to avoid the fact that the potential long-term impact of issues like commodity demand shortages, trade and crew welfare paint an ominous picture and, at a time like this, it is easy to point out the struggles that the dry bulk industry, like so many others, is facing. It is nothing if not robust though and will undoubtedly endure, but one thing remains irrevocably clear: the industry will be feeling the pandemic’s heat well into the future.