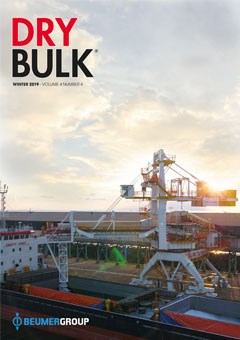 IMO 2020 is coming. In less than a month, vessels will be forced to comply with strict regulations regarding the limit for sulfur in fuel oil used on board ships operating outside designated emission control areas. The International Maritime Organization (IMO) details that, effective 1 January 2020, the sulfur limit will be reduced to 0.5% from the current 3.5%. This will reduce the amount of sulfur oxides (SOX) being released from ships, and should have significant health and environmental benefits globally.

Under this legislation, vessels must either install exhaust gas cleaning systems (scrubbers) or switch from high sulfur fuel oil (HSFO) to low sulfur distillate fuels or low sulfur fuel oils (LSFO). And come 1 March, a new carriage ban of HSFO will mean that ships without scrubbers won't be permitted to carry HSFO.

The reason? Whilst closed loop scrubbers are able to keep the majority of water used in the onboard sulfur removal process for disposal at the port, open loop scrubbers remove the sulfur from the vessel's smokestack with water before being pumped overboard.

On the other end of the spectrum, despite the numerous prohibitions, Japan has stated it will not impose any restrictions on the use of open loop scrubbers, favouring the use of these systems.

Back in February, a report was prepared for Japan's Ministry of Land, Infrastructure, Transport and Tourism (MLIT), titled 'Washwater discharge from open-looped SOX scrubber system'. The report stated: "Japan concluded that the discharge water with chemical substances such as SOX, PAHs and heavy metals can not cause unacceptable effects either on the marine organisms or on the seawater quality around Japan."2

This claim was met with criticism from many. Even Greg Atkinson, Founder and Chief Technology Officer at Japanese-based Eco Marine Power, took issue with this statement, claiming that "after reading the report by the expert board several times, I was unable to find clear evidence with the appropriate references to fully support those conclusions."3

However, regardless of the region's differing views on open looped scrubber usage, closed and hybrid scrubbers will have their fair share of issues too.

According to industry veteran Simon Neo: "Major ports, apart from Japan, do not allow open loop scrubbers to operate within their territorial waters. And vessels using the closed loop or hybrid systems will also face some problems with the disposal of the waste products produced by these scrubbers, because not many port states have announced their readiness to receive this waste for treatment and safe disposal."

Read more about the impending IMO 2020 regulation and the effect it will have on the dry bulk shipping market in BIMCO's article on p. 8.