In 2018, Mantsinen Group Ltd Oy celebrates its 55 year anniversary as a company. The Group, known of its logistics services and material handling machines, celebrated its anniversary on Saturday 22 September at the Liperi factory. At the same time, Veli Mantsinen celebrated his 80th birthday on 23 September with his family. 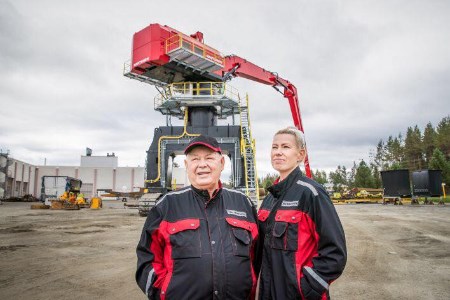 For Veli Mantsinen, a co-founder of the company, year 2018 marks the time for a generational change.

“We are a family company, and working together is important to us,” he says. “My brother Jussi retired five years ago, and now it is my turn.”

“Our roots and the future are both important to us,” says Veli Mantsinen. “My career as an entrepreneur began in Liperi and my home has always been in North Karelia. […] My daughters have been around the globe, and the company’s future is in international growth. Now it is a good time to hand over leadership to the next generation on a solid basis.”

The Mantsinen Group has a total of about 500 employees, of which 270 work in Finland and 230 in Russia. The Liperi factory produces material handling machines and port cranes, which have been delivered to almost 30 countries. The product development of machines and equipment also takes place in Liperi.

At the beginning of September, Mantsinen expanded its production by opening a second assembly unit in Rauma. The second business unit of the company, Logistics Services, provides services to customers mainly in the forest industry in Finland and Russia.

Read the article online at: https://www.drybulkmagazine.com/dry-bulk/27092018/2018-marks-generational-change-for-mantsinen-group/