G3 Canada Ltd’s staff and customers, as well as other dignitaries gathered today to celebrate the grand opening of G3’s new lake terminal at the Port of Hamilton. 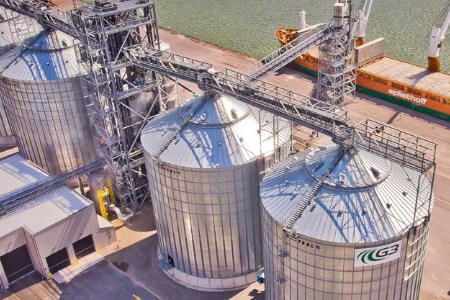 The terminal is the centerpiece of G3’s entrance into the southern Ontario grain handling market. Construction of the 50 000 t facility began in fall 2015 and was completed on schedule in April 2017. Consistent with G3’s other new facilities across Canada, G3 Hamilton features technology that maximizes facility load and unload speed.

"Customers of G3 Hamilton should immediately notice our commitment to efficiency and customer service. Trucks will experience faster unload times allowing them to get back on the road as quickly as possible," said Karl Gerrand, CEO, G3 Canada Ltd. "Our staff are very excited to start earning the business of Ontario farmers, and to establish a strong position for G3 in the local agricultural industry and broader community.”

G3 Hamilton accepted the first grain deliveries in March 2017, and successfully completed loading its first vessel in June. The terminal is located at Pier 26 on Eastport Boulevard in the Port of Hamilton.

Read the article online at: https://www.drybulkmagazine.com/dry-bulk/27062017/g3-canada-celebrates-grand-opening/

T. Parker Host has announced the largest amount of cargo ever loaded on the Mississippi River, sailing from United Bulk Terminals and coordinated by Host Agency.