An EastGate report has stated that Chinese steel stockpiles reached record highs amid the coronavirus outbreak, but are now steadily easing. This paints the picture of an increased construction activity and a growing seaborne demand for the key dry bulk commodity of iron ore. 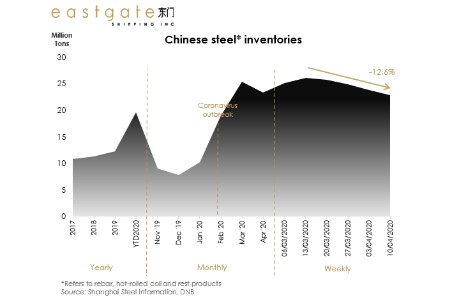 Steel inventories in China have been showing a steady downward trend following the all-time highs recorded in mid-March. The virus crisis triggered a nationwide lockdown halting most manufacturing and industrial activities.

Subsequently, demand for steel products was negatively affected. However, blast-furnace mills are designed to run constantly which essentially meant that while demand declined substantially amid logistical constraints, steel output continued, leading on 13 March to a record high of steel inventories to the tune of 26.1 million t. By end of March, most Chinese manufacturers have been back to business as usual, drawing from the inventories built over the previous weeks. This was translated into a significant slide in the steel stockpiles by mid-April, down by 12.6% on week 15.

While steel stockpiles are still elevated, the destocking seen over the past few weeks comes in line with the respective Chinese imports of the raw material of iron ore in March: 85.91 million t, down only by 0.6% from March 2019. Added to that, China’s ore stockpiles recently reached 119 million t, down by 18% from YTD2019.

This drop in steel inventory levels signals a pickup in construction activity and fewer bottlenecks in China. Assuming the trend is sustained, it increases the likelihood of a recovery in domestic demand for iron ore as well as for the bulk carriers that transport it from overseas. Indeed, the easing stockpiles and the increase in ore demand have helped drive the Baltic Capesize Index upward: from the historic low of -372 on 9 March to 887 points a month later on 16 April, having Capesizes earning on average around US$9200/d.

The consecutive drop in steel inventories and the significant stimuli China is said to impose to reignite its economy post-pandemic, offer some positive encouragement for the dry bulk shipping outlook. We should expect a certain restocking of said inventories to take place in 2H20 along with some significant infrastructure spending.

While demand for iron ore is returning to what are considered normal levels, supply fundamentals are posing legitimate concerns. Worldwide operations of major mining groups have been affected due to lockdowns and stringent measures taken for the virus containment. Despite mines in key regions (reference to West Australia, Brazil and South Africa) having been designated as an essential service and hence remained open, their production is forecast to decline and that can very well impact their export volume. Special procedures implemented under the scope of reducing exposure to the virus, have slowed down production and delayed development projects. Iron ore prices have, however, shown some notable resistance remaining relatively strong which showcases confidence in China’s imminent infrastructure investment.

Overall, key metrics point to an increase in iron ore demand over the next quarters. It appears China is getting back on its feet. And with that comes a commodity-intensive growth which is in turn likely to positively affect demand for iron ore and increase freight rates for the vessels that carry it.

Read the article online at: https://www.drybulkmagazine.com/dry-bulk/20042020/eastgate-chinese-steel-stockpiles-retreating-a-positive-indicator-for-iron-ore-demand/