Cooper Specialised Handling has confirmed the delivery the world’s largest hydraulic crane to Belfast Harbour and that it has entered service. Also, in a landmark delivery, the machine was delivered in one-piece which marks a watershed for future deliveries of hydraulic cranes into portside customers for the UK port equipment supply specialist. 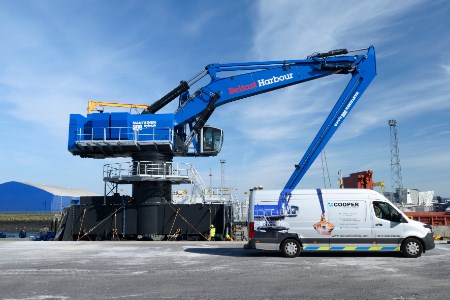 Belfast Harbour is Northern Ireland's principal maritime gateway and logistics hub, serving the Northern Ireland economy and increasingly that of the Republic of Ireland. Around 70% of Northern Ireland's and 20% of the entire island's seaborne trade pass through the Harbour. Last year, the port reported more than 24 million t of cargo handled including, coal, grain and aggregates.

The new Mantsinen 300M is recognised as the world’s largest hydraulic crane and, whilst these machines can reach 460 t in unladen weight, the Belfast Harbour 300M weighs in at 370 t without attachments. It has been specified in order that it can lift 30 t steel coils from the far side of vessels that visit the port as well as handling bulk and breakbulk cargo in and out of vessels a large as 36 000 DWT.

The new 300M is a wheeled machine mounted on six axles and 24 rubber tyres. Weight distribution in operating mode has been reduced by four double-pads each measuring 14 m2. The 300 will join a Mantsinen 160M, also a wheeled machine, supplied in 2016 which has already become a popular crane given its speed of operation, reach and capacity.

Speaking on behalf of Cooper SH, Executive Director David Cooper stated: “The new 300M is much more than a single crane supply. Belfast Harbour, through their experience of the 160 have identified the speed and productivity advantages these type of machines provide and now, with this super-capacity crane, the customer can enjoy the reach and capacity more associated with mobile harbour crane but with the operational speed of a material handler. This new enhanced productivity will reap dividends for Belfast Harbour and its customers and they should be congratulated for their vision and creativity in selecting this option.”

Michael Robinson, Port Director, Belfast Harbour, added: “The additional reach, productivity and general versatility of the Mantsinen 300 means it is a very welcome addition to our cargo handling portfolio and will assist in our ambitions to provide our customers with highly efficient and flexible cargo handling solutions. It is an impressive machine and we are delighted to bring yet more modern, cutting edge equipment for our port customers having invested more than £20 million in new cranes over the last 10 years.”

In what was a first for Cooper, the 300M was delivered as a complete unit having been assembled in Mantsinen’s assembly facility in Rauma on Finland’s West coast. The sub-assemblies were manufactured in Mantsinen’s production facility in Liperi, Central-East Finland but final assembly and function testing was completed in Rauma this facilitating a direct port-to-port sailing which took six days. Actual transfer of the crane onto the quay took just 30 min.

Cooper added: “This represents the future of crane deliveries. Large cranes can take five days of building and expensive twin-lift mobile cranes to assist in the build function – this method eliminates the need of disassembly for shipping and re-assembly on arrival which ties up quay areas as build areas for a long period of time. For our port customers, we can see all future deliveries, large and small, being completed this way.”

Read the article online at: https://www.drybulkmagazine.com/dry-bulk/04072019/belfast-harbour-commissioners-takes-delivery-of-mantsinen-300m/