In the Russian city of Murmansk, tonnes of Siberian coal leave the port every day. The material is handled and loaded with a SENNEBOGEN 875 material handler.

In the port of Murmansk, which extends for several kilometres along Kola Bay, mainly coal is handled on a large scale, in addition to single items, bulk goods, and containers. Up to 500 cars bring coal from the mining areas in Siberia via rail to the port of Murmansk. 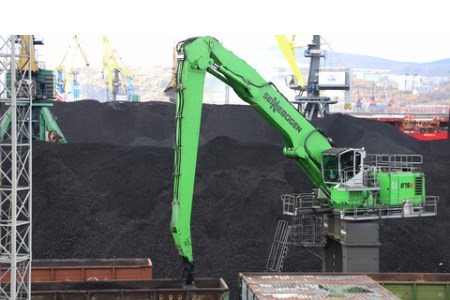 With the modern handling technology of SENNEBOGEN, the railcars are unloaded there, and the coal is stored in large stocks to be loaded on ships later. Equipped with a crawler portal undercarriage, the SENNEBOGEN 875 stands directly over the rails, in order to remove the coal with the 5 m3 double shell grab. Thanks to a track width of 5.80 m and a passage height of 5.0 m, the undercarriage spans one of the two railway lines but can comfortably serve both railway lines at the same time, one directly underneath the machine and one parallel to it. In addition, the diesel-driven material handler has a range of 24 m and alternately unloads the railcars on the right and left in a continuous cycle.

The machines that the responsible sales and service partner JSC KWINTMADI delivered in mid 2015 have a 395 kW diesel engine and the proven Green Hybrid energy recovery system. The 875 was optimised with a low temperature package for use at Artic temperatures. This includes numerous preheating mechanisms for the equipment and the Green Hybrid system, as well as special lubricants for temperatures down to -35°C.

For the employees of Murmansk Commercial Seaport, the reliability and availability of the SENNEBOGEN machines are paramount. With modern handling technology, they are equipped for the challenges of the increasing goods handling. In addition to the 875 with crawler portal, several SENNEBOGEN 830 and 835 material handlers are also in use in the port area. These load and transport all kinds of bulk goods. The competent service and regular maintenance by KwintMadi, which is represented by a branch in Murmansk, ensure maximum availability and guarantee a long service life for the machines.

Read the article online at: https://www.drybulkmagazine.com/ports-terminals/30112016/sennebogen-875-successfully-unloading-coal-at-the-port-of-murmansk/