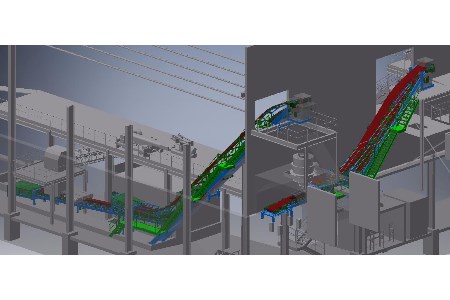 The DSI sandwich high-angle conveyors will serve as transfer conveyors elevating crushed pebble ore, each at a rate of 135 tph, and operating at an incline angle of 45°.

Buriticá is approximately a two-hour drive on the paved, Pan-American highway from Medellín, Colombia‘s second largest city. Highlights of the project include:

DSI sandwich belt high-angle conveyors take on many forms and offer many advantages. Each DSI sandwich conveyor uses two-standard, smooth-surfaced conveyor belts, face-to-face, to gently but firmly contain the product being carried. This not only makes steep angles possible; it also offers a spillage free, environmentally sound operation because the material remains secured between the belts.

The use of all conventional conveyor parts ensures high availability and low maintenance costs, as well as interchangeability of components and fast delivery of replacement parts.

Read the article online at: https://www.drybulkmagazine.com/material-handling/23082017/dos-santos-international-to-supply-high-angle-conveyors-for-the-buritic-project/