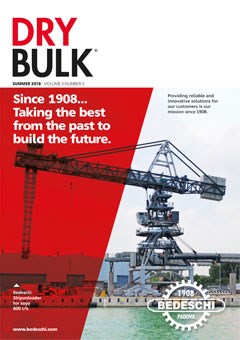 From food to fuel, it cannot be denied that the soybean has become part of everyday life. In our household, for instance, soy sauce is an ubiquitous staple in the kitchen. A rich condiment comprised of fermented soybeans – sounds delicious.

Soybeans have been hitting the headlines recently, from the ongoing US-China trade debate, to slowing soy harvests in Argentina following continued wet weather.

But there is currently one other topical soy discussion in the news. On 13 May, HSBC Singapore announced it had performed the world’s first blockchain trade finance transaction. HSBC and Dutch bank ING used Corda blockchain technology to finance a shipment of Argentinian soybeans to Malaysia for Cargill, a US food and agricultural company. Hashtagging ‘#TransformingTrade’, the company tweeted it is “revolutionising the future of documentary trade.”

Reportedly, the exchange was performed in a mere 24 hours; with traditional methods, this would normally take between five and 10 days.

Vivek Ramachandran, HSBC Global Head of Innovation and Growth for Commercial Banking, stated: “With blockchain, the need for paper reconciliation is removed because all parties are linked on the platform and updates are instantaneous.”

Currently, the majority of blockchain developments in the shipping industry have focused primarily on the container sector. But this seems to be changing, with a number of significant developments being made in the dry bulk market prior to HSBC’s announcement.

“Distributed ledger technologies have been evolving rapidly, bringing more efficiency and security to our transactions, and immense expected benefits for our customers and everyone along the supply chain as a result,” explained Gonzalo Ramírez Martiarena, Chief Executive Officer of Louis Dreyfus Company.

Following on the heels of Dreyfus was Prime Shipping Foundation. In January, the company revealed it carried out the world’s first transportation agreement settled in bitcoin. The freight deal was for the delivery of 3000 t of wheat, to be shipped from Russia’s Rostov-on-Don port to Samsun in Turkey.

Prime Shipping Foundation Chief Executive Officer Ivan Vikulov revealed: “The consignment was part of pilot testing of Prime Shipping Foundation’s blockchain payment system for bulk commodities. [...] We are trying to develop a cross-border payment system that’s easier and faster than what’s available now. As far as we know, this is the first freight deal done in a cryptocurrency.”

With the aim of making trade finance deals simpler, faster and more secure, it seems there could be definite potential to use cryptocurrencies and blockchain technologies in the dry bulk commodity market.

As HSBC believes: “Blockchain can pull trade into the digital age.”