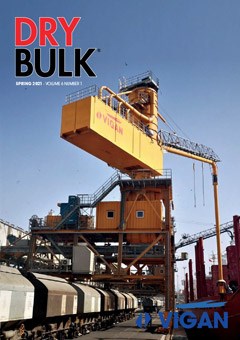 As the daffodils, crocuses and snowdrops emerge in their full splendour across Northern Hemisphere gardens, they are an indication that spring is upon us, as is the Spring issue of Dry Bulk, the first issue of 2021.

While spring represents a season of new beginnings and life, there doesn’t appear to be any signs for a more budding relationship between China and Australia. Could this be down to the fact Australia is actually in its autumnal season so has no desire for new beginnings, or could it be the fact the country does not seem to be suffering significantly by the numerous trade bans China has imposed on its goods? Now restricted from arriving on Chinese soil are the Australian products of lobster, barley, sugar, wine, and coal. Conveniently, China has not placed a ban on imports of iron ore, which represents Australia’s largest export to the nation and also accounts for 70% of China’s total iron ore imports. A subtle acknowledgement between the countries perhaps that they aren’t happy with each other but they still need each other.

The soured relationship between the two countries in question has been deteriorating for the past year, with the initial spark rumoured to have revolved around Australia’s ban on China’s Huawei tech giant constructing 5G networks in the country, and also Australia’s involvement in supporting an investigation into the outbreak of COVID-19 – which was based in China. China’s retaliatory trade bans, specifically the ban on Australian coal, has forced diversification and the exploration of new avenues by both parties, which has, to some degree, reduced the severity of the ban’s impact.

With cargoes of Australian coal unable to clear customs in China, there have been bulk carriers sat in limbo across the waters for months, with figures hovering around the 50 mark. Whilst some ports in Australia are reporting declines in quantities of coal being shipped – Dalrymple Bay Infrastructure’s CEO stated that its terminal in Queensland has experienced a fall in coal shipments from 67 million t down to 55 million t in 2020 – some coal is finding alternative customers and keeping the industry upbeat. Reportedly, these customers can be found in India, Pakistan, Japan, and the Middle East.

China also has found replacement suppliers in Russia and South Africa, since the country’s National Bureau of Statistics has stated that coal consumption is actually on the increase, growing 0.6% in 2020. Interestingly, China stopped importing coal from Russia for several years because the chlorine and trace elements found in the product was not to China’s liking, however, the arrival of a trade dispute with Australia has paved the return for Russia. One man’s loss is another’s gain.

Though stunted by their current situation, Australia and China have had a positive relationship for years, and collaborate across many markets. China has invested considerable sums Down Under in manufacturing, real estate, mining and more, with 111 Chinese investments recorded in 2016. Jump ahead to 2020 and data is less rosy, with only 20 investments from China, representing an overall 61% decrease in Chinese investment – the lowest figure since 2014. The decline of this investment machine is associated with delayed repercussions from the temporary measures put into place in Australia during the peak of COVID-19, as well as with reforms to its foreign investment laws.

The continuation of China and Australia’s trade bans will be important to watch, because whilst other avenues have been sought to fill in for missing trade – i.e. South African coal – their long-term viability is questionable.