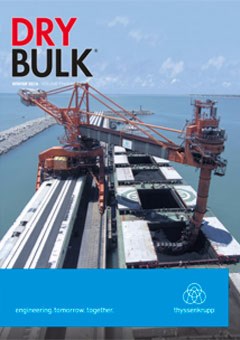 The Winter 2016 issue of Dry Bulk ends a year of surprises, upsets and achievements, and brings in a new year of possibilities. From political controversy to Olympic Games scandals, the year will certainly be an interesting topic in a history class in 30 years time.

It’s difficult to know what the year will be remembered for: a controversial US Presidential election, Brexit, Colombia’s Peace Deal, a substantial amount of celebrity losses, or even DiCaprio’s first Oscar?

Much like 2016, the dry bulk market has had its fair share of ups and downs over the past 12 months. Initially, it was not a great start. The Baltic Dry Index (BDI) hit a record low of 290 points back in February – largely due to weak demand for commodities. While freight rates gradually improved over the year, the BDI was still below last year’s levels.

However, the industry did pick itself up with freight rates improving, giving us a glimpse of light and recovery. Shipping analyst BIMCO reported, as it expected, 4Q16 delivered high demand for dry bulk ships. The handymax sector grew the most in 2016 – by 5% – and capesize and panamax sectors had more moderate growth, 1.9% and 0.6% respectively.

One of the three major dry bulks, coal, caught many off guard and performed better than expected in 2016. After years of price slumps and declining demand, there was a surge in both metallurgical and thermal coal prices in 2016, as China reduced its coal production (a result of a new government policy reducing miners’ working days), which led to prices increasing and the country relying more on imports.

Iron ore also shone in 2016 (although performing moderately in comparison to coal). China was again to thank here. Increased Chinese steelmaking, as well as higher demand for iron ore from the country, helped keep its prices strong in 2016.

Now the industry needs to prepare for what could be in store in 2017 – the year of the rebound? While the positive performances may be good signs for the year ahead, cautious optimism seems to be the running theme in outlooks.

Both BIMCO and Maritime Strategies International (MSI) have indicated that the industry’s solid finish in 2016 is welcomed and there is potential for 2017 to keep heading towards recovery, but it will not be easy. A slow and difficult road lies ahead and we should not get ahead of ourselves. Growing economies, expanding infrastructure and increases in steel production are projected to lead to moderate growth for the dry bulk market in 2017.

Freight rates are largely expected to remain low as the supply-demand balance evens out. BIMCO expects supply to exceed demand, resulting in a level of loss-making freight rates. MSI’s Senior Analyst Will Fray indicated that there may be potential for brief rises in the short term but nothing to make any substantial long-term rate increase. But Rome wasn’t built in a day, right?

China seems to (unsurprisingly) be the root of optimism (or caution) for the next year. BIMCO believes the country’s five-year plan for improving transport connectivity will have a positive effect on dry bulk imports and be beneficial to the dry bulk shipping sector. But the slowing economic growth of the country could be a major limitation to the industry’s growth.

One thing’s for sure, it will not be plain sailing. There are many factors that will shape the next year and, maybe longer term, we will begin to see that light at the end of the tunnel.